The International Association for the Cognitive and Evolutionary Sciences of Religion (IACESR) is an interdisciplinary group of scholars interested in the scientific study of religion.

The Cognitive and Evolutionary Science of Religion

The cognitive and evolutionary sciences of religion are multidisciplinary. Scholars from a wide variety of disciplines in the human, social, natural and health sciences are working on important breakthroughs that have significant impact on the academic, comparative study of religion. Specialists in religion have an important role to play, since colleagues from disciplines and sciences that normally do not deal with religion need creative interplay and feedback to better understand the significance of their findings. Cognitive scientists and experimental psychologists, on the other hand, are helping colleagues from study of religion disciplines in hitherto new and exciting ways. Some scholars of religion are also experimental scientists. Some experimental scientists are also highly competent philosophers and scholars of religion. The IACESR is designed to provide an organizational framework for this variety in which we can meet and debate, present new findings, develop innovative theories and help young scholars along their chosen paths.

The objective of the IACESR is to promote the cognitive and evolutionary sciences of religion through international collaboration of all scholars whose research has a bearing on the subject. This objective is attained through scholarly activities such as the arrangement of biennial conferences as well as interim local meetings, the encouragement of research projects and support of scholarly publications, and the exchange of information through electronic or other means.

The IACESR seeks to advance the naturalistic study of religion. Issues such as the dialogue between science and religion, attempts to find religion in science and science in religion, or attempts to validate religious or spiritual doctrines through cognitive science are not ones that the IACESR addresses. Pursuits addressing those matters should be submitted to other associations and other forums that better address such concerns. 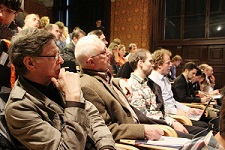 The IACESR was founded in 2006 as the International Association for the Cognitive Science of Religion (IACSR) and Evolutionary was added to the name and mandate in 2020.

IACESR is an affiliate of the International Association for the History of Religions (IAHR) and the American Academy of Religion (AAR).